PBS – On the Verge of Something New? 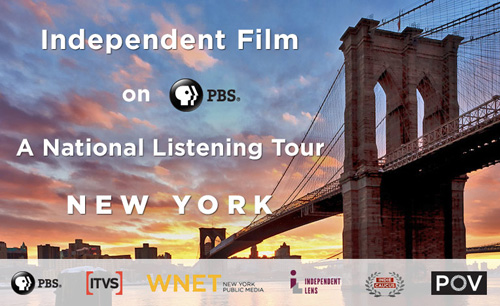 Today I attended the PBS Listening Tour in NYC, a forum for PBS executives to hear ideas from filmmakers and community members on creating national strategies to highlight independent films.

A lot of documentary heavy hitters showed up to this meeting, and made direct complaints about a schedule change (which has been temporarily revoked) in New York that would take P.O.V. and Independent Lens (IL) off of prime time.

They complained about how the show would lose prestige and have less of an audience, in turn affecting filmmakers ability to drum up future funding. One filmmaker threatened to pass on Independent Lens in the future because he could get more money elsewhere, and it wouldn’t be worth the sacrifice if he wasn’t getting the eyeballs. A woman on the panel then spoke about a filmmaker at Sundance passing on their bid. It’s possible that they may lose the type of programming they generally air with this programming decision.

I started to think about how the face of these PBS shows would change if these popular filmmakers were no longer interested in airing during these time slots. And I got excited about it.

I got in line to share my ideas, and of course, the event ended as my time to talk approached.

So here are my ideas. Yay for blogs.

A majority of the documentaries shown by both POV and Independent Lens (IL) are films that perform well on the film festival circuit, are made by popular filmmakers, and receive major funding. If these filmmakers no longer think POV and IL are prime spots, WHAT WOULD HAPPEN IF the shows made it their primary mission to lift up another tier of filmmakers?

Currently POV and IL rely on the films’ buzz to generate PR and viewers. WHAT IF they showed lesser known films and put more money into marketing and outreach? What if these shows were DARING and showed potent, quality films by lesser known filmmakers? Perhaps they could ACTUALLY be on the CUTTING EDGE of something.

POV and IL dont have to jock the bigger filmmakers. There are hundreds of fantastic films out there that deserve national attention and would jump at the chance to be aired on PBS.

PBS may even be able to tap into A NEW AUDIENCE by giving a platform to fresh voices. Bring in the next generation, or a different demographic of VIEWERS and FILMMAKERS.

Many films that air on PBS fall into a number of different social issue topics. Connecting with organizations that have a similar goal or point of view as a film can boost viewership if they agree to eblast their constituents, and play up the broadcast on social media.

Because making first contact is often the hardest part of outreach, A PBS outreach department could create a compendium of NGOs by topic for filmmakers to refer to. They could vet each of these organizations  and create relationships with them. When filmmakers who are airing on PBS are strategizing outreach for their broadcast, these relationships can help filmmakers enormously. The filmmaker can reach out to these national organization where a connection has already been forged, and discuss optimal  ways of getting the word out about the broadcast.

Lastly, give filmmakers earmarked funds for grassroots outreach. This is not wasted money. It is a pointed way of getting people who are interested in certain topics to turn on their televisions and watch a show.

Changing timeslots for POV and IL might be a good thing. Let the heavy hitters off the hook – let them go to whatever station they want. PBS can take this an opportunity to grow and discover new talent – not as a set back.